Ferris Wheel puzzle model has an interesting story behind its concept. So where does this curious name of the amusement ride come from? What is the meaning of Ferris wheel? In fact, there used to be prototypes of rotating wheels for entertainment in Turkey and England as long ago as in the 16th and 17th centuries. However, the revolving amusement ride as we know it today got its name from its inventor.

In 1893, Chicago was to host the World’s Columbian Exposition. Americans had to think of some edifice that would if not surpass the fame of the Parisian Eiffel Tower, built for the World Expo in 1889, then at least match its grandeur. In 1891, George Washington Gale Ferris, a young and daring bridge engineer form Pittsburgh, suggested the idea of building a huge attraction wheel with cabins for visitors who would observe the city while the cabins would rise and rotate. This project was welcomed and got realized. Operated by steam engines, the Chicago Ferris Wheel was 80.4 m high. It had 36 cabins, each of them for 60 people. From June to October 1893, more than 1.4 million visitors paid 50c for the entry ticket! 50c does not sound that much today, but in those times it was approximately half a day wage equivalent!

Since the first contemporary Ferris wheel, it was all about competition in constructing bigger and bigger ones. Like High Roller (167.6 m) in Las Vegas, Star of Nanchang (160 m) in China or Singapore Flyer (165 m). But that is not the end of the race! The ex-mayor of New York City Michael Bloomberg promised to build the world’s highest observation wheel (190 m) in Staten Island by 2015, but the construction is far from its final stage even now in 2017. Yet, there is a disappointing story of the unbuilt gigantic observation wheel in Beijing, China. The construction began in 2007 of what was planned to be the world’s tallest Ferris Wheel by 2008. It was supposed to be 207 m high but the project was closed due to organizational problems.

The story goes that George W. Ferris came up with the concept of his invention and sketched it on a restaurant napkin at a bar. The engineers at Wooden.City spend at least 5 months to complete the project of a new model. The constructions of gigantic Ferris wheels take years and many millions of dollars to complete. Wooden Ferris Wheel is not a multi-million dollar investment but a great DIY project for those with passion for engineering, puzzles and challenges. It takes at least 8 hours to complete this ferris wheel puzzle. 429 parts that need to be assembled into one working mechanism – this looks and sounds like a brain twister for real die-hards!

The visual manual for assembly of this 3D kinetic model puzzle provides clear step-by-step instructions. Follow them to create a 32 cm high model of a Ferris wheel. The original rubber-band engine will rotate the six cabins for more than 1 minute. More than just a puzzle, Wooden.City Ferris Wheel will serve as a secret holder for jewelry and a coin box to collect some change for small treats.

Did you know that you can assemble any Wooden.City puzzle model and then re-assemble it and then repeat the process again? Just like the famous forefather, the Chicago Ferris Wheel was deconstructed and moved twice to different locations after the World Expo.

Be the first to review “FERRIS WHEEL” Cancel reply 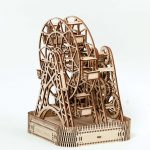